Unless there is additional maintenance or events

Check this page for updates

You can donate here to help fund the trails at Huckleberry Swamp. 100 % of your donation will be used to maintain our trails. 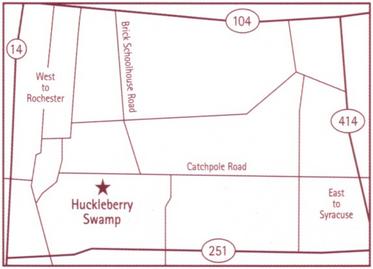 HUCKLEBERRY SWAMP........ A Walk Through Nature

***Huckleberry Swamp will be closed Friday, April 16, 2021 from 9am-2pm for a private event. The gates will reopen at 2pm so if you are planning a visit please keep these hours in mind***

Nature is an important aspect of one’s life. Humans, plants, and animals all rely on nature in order to survive in their different environments. People eat plant and animal products while wildlife sustain themselves by hunting or foraging. Therefore, it’s crucial that the environment is preserved in order for life to continue on earth.

One of the aforementioned environments is the wetland. Wetlands are either temporarily or permanently flooded with water and demonstrate a large amount of biodiversity. In addition, this biome is seen as transitional between land and underwater ecosystems. This means that wetlands exhibit traits of both habitats. Also, this type of environment is divided into different categories like marshes and swamps (Cherry). Huckleberry Swamp is, of course, a swamp. Swamps are forested areas, and northern ones are usually composed of different types of maple, elm, and ash species (Freedman). In terms of wildlife, wetland birds are usually migratory or waterfowl like ducks, egrets, and geese. Furthermore, more than one-third of endangered or threatened U.S. bird species only live in wetlands, and about half live in the biome for a certain amount of time (Cherry). Thus, the importance of nature conservation is brought into view, for it is imperative that these bird species be kept alive along with other wetland creatures. To expand more upon the topic of threatened birds, species that are commonly hunted find wetlands to be vital for their survival. Their respective populations are shown to have decreased during the past century, but measures to regulate hunting and conserve wetlands caused some populations to increase (Freedman). It should be mentioned, however, that this biome in particular holds more importance than just housing endangered bird species.

Wetlands are known to provide humans with essential services and should therefore be conserved. For example, wetlands reduce the probability of floods by regulating water flows and provide water for drinking or irrigation. The water is naturally rid of pollutants like metals and pesticides. Moreover, wetlands also prevent the erosion of shorelines and regulate sedimentation (Freedman). With so many positive effects that wetlands provide, it becomes increasingly obvious that such environments must be protected. Of course, one must know how wetlands are being threatened in order to take action. The main reasons as to why wetlands are being destroyed are agriculture, urbanization, and industrialization. The biome is drained and promptly filled in so that the land can be built upon. If they’re not filled, they become dumping sites for sewage, solid waste, and mine tailings. Not to mention, wetlands are also deforested and stripped of peat, which is a fossil fuel (Freedman). These actions result in wetlands becoming uninhabitable and the relocation or death of organisms. Additionally, wetlands are susceptible to climate change. For instance, climate change can give rise to more drying or flooding, alter the ecosystem and the creatures within it, and result in even more carbon being emitted into the atmosphere. Wetlands are known to be very useful carbon sinks, or they store carbon in the soil in order to keep it from entering the atmosphere. In fact, wetlands that have been protected from humans store about twice as much carbon as those that have been disturbed (“Wetlands & Climate Change”). Wetlands are necessary for the regulation of climate change and to prevent climate change from worsening. This environment needs to be conserved so that these economic services are not lost.

Wetlands are an important environment and are necessary for the survival of both humans and wildlife. This type of ecosystem houses many different species of birds and other fauna that are threatened by extinction. Moreover, wetlands monitor natures’ hydrologic processes as well as carbon emissions. Thus, it can be concluded that wetlands and the wildlife within need support for their conservation and protection.